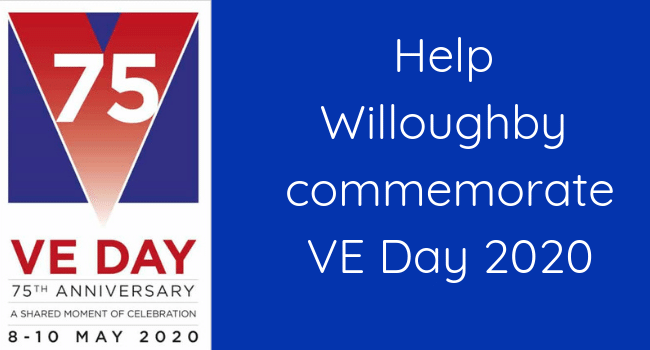 Plans are being formulated nationally for events in May 2020 to mark the 75th anniversary of the ending of WW2, and the parish council are looking for ways to join in the activities that will be taking place.

The council will welcome any suggestions from residents for ideas for activities and events that might be held in the village in order we can be part of the nation’s tribute to all those who gave their lives and those who kept the country running during the most challenging times between 1939 and 1945. Please contact us via our details, here, with your suggestions.

May 8, 1945 was when peace emerged after nearly six years of war, so the 75th anniversary on that day in 2020 represents an important milestone in the country’s history. The parish council they agree they cannot let this day pass without reflecting on the enormous sacrifice, courage and determination of people from all walks of life who saw the country through this dark period.

The national celebration, VE Day 75, will cover the weekend of 8th – 10th May , and will be an international celebration of peace – a time to remember, reflect and pay tribute to the millions who played such a vital part in achieving it, including the Armed Forces personnel from many countries who gave their lives, and those who returned home injured in body and mind; the hard-working women and men who kept the factories, mines, shipyards and farms operating throughout the years of turmoil; the ARP wardens, police officers, doctors, nurses, firemen, local defence volunteers and many others who put their lives on hold to safeguard the home front.

Over the three day period the events — the first of which on Friday May 8 has been declared a special public holiday — will include the playing of specially written musical tributes to highlight the Nation’s Toast to the Heroes of WW2. There will also be a Cry for Peace around the World and all Churches and Cathedrals are being asked to take part in sessions of Ringing out for Peace. Street parties and parties in pubs, clubs, Hotels, on town and village greens and in halls etc will be the plans for the Saturday and services of commemoration and celebration in churches, including the reading of the Tribute to the Millions and the playing of the Last Post on the Sunday.

On the first day, May 8, events are suggested for 3pm to tie in with the exact time 785 years ago Winston Churchill announced to the nation the ending of hostilities against Germany and their defeat. Pipers from around the world will open VE Day 75 by playing Battle’s O’er and VE 75 Years at 3pm local time in the country they are in, paying tribute to the millions who gave so much to earn our freedom today. Battle’s O’er is the traditional tune played by pipers at the end of a battle, and VE 75 Years has been specially written for this occasion by Pipe Major Roger Bayes of the City of Norwich Pipe Band. Battle’s O’er will be played by pipers from the top of the four highest Peaks in the UK – Ben Nevis, Scotland; Scafell Pike, England; Mount Snowdon, Wales, and Slieve Donnard, Northern Ireland – and also at the five furthest points in the UK. This has never been undertaken before.

At 3pm, in association with the British Beer & Pub Association, the thousands of pubs throughout the United Kingdom, Channel Islands and the Isle of Man will be inviting their customers to raise a glass at 3pm too and take part in The Nation’s Toast to the Heroes of WW2. At 6.55pm – A Cry for Peace Around the World will see Town Criers and members of local communities around the world undertaking A Cry for Peace Around the World, written for this occasion by Crier Peter Taunton.

7pm – Ringing out for Peace
Bells in churches and cathedrals will ring out at 7pm in a collective celebration of VE Day 75. The sound of church bells is deeply rooted in British culture. They provide the grand soundtrack to our historic moments, calling us to wake, to pray, to work, to arms, to feast, to celebrate and, in times of crisis, to come together.

On Sunday May 10 at 10.30am Church Services of Celebration and Commemoration Services will take place in cathedrals and churches throughout the UK, Channel Islands and the Isle of Man to celebrate the peace we share today and remember those who lost their lives or returned home dreadfully wounded.