Signs of Autumn in Willoughby 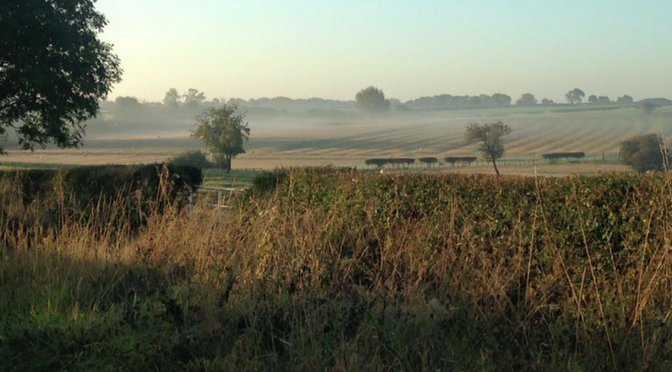 “To autumn” by John Keats (1792-1821) must surely be one of the most quoted poems in English, with its “Season of mists and mellow fruitfulness”.

But what of our local natural history in autumn, and of its fruitfulness?  As drivers we’re not always pleased to see the mists, but what does the local wildlife make of this time of year?

In the lanes and hedges fruitfulness can be found in the form of several berries, such as sloes, blackberries, dog rose hips and hawthorn. In gardens root vegetables are harvested. Berries attract seasonal bird visitors, and we are fortunate to see fieldfares and redwings, which, as the season goes on, become more adventurous and come into my garden to eat up Cotoneaster berries. It’s good to see these avian visitors, though it’s a pity they finish off the berries before Christmas, but I can’t have it both ways.

Another bird species of the season is the lapwing, small flocks of which sometimes wheel over the fields.

Ivy begins to flower at this time. Opinions on ivy seem to vary amongst tree experts. Some say it does no harm to healthy trees, and its flowers provide food for insects at hungry times of year. Others seem concerned that it might hasten the demise of older trees. My view, for what it’s worth, is that both are right under different circumstances.

Birds visit garden bird tables and feeders more as the autumn wears on, until by winter some seem to come to depend on them. Most of us are pleased to see them returning to the gardens.

…and for me the autumn season of fruitfulness is nicely epitomized by parsnip and apple soup from the WI cook book.